Getting to know NFDI, the German National Research Data Infrastructure, with York Sure-Vetter 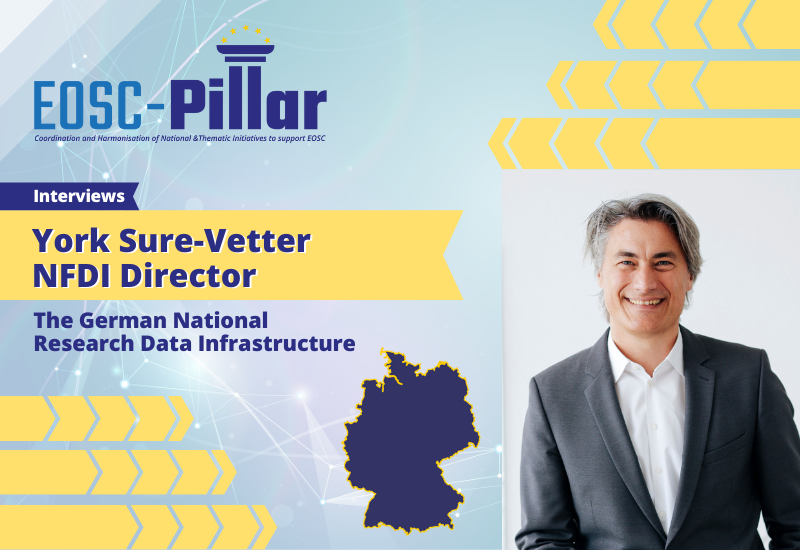 Open Science in Europe is constantly evolving, and each country is working hard to ensure an overall improvement of a dynamic environment where researchers can collaborate and thrive. Germany is no exception to this rule, as demonstrated by the major steps recently taken by its newly-established National Research Data Infrastructure, NFDI (Nationale Forschungsdateninfrastruktur), directed by York Sure-Vetter.

Earlier this year, we already had a first chance to learn more about the Open Science landscape in Germany thanks to EOSC Association Director Klaus Tochtermann. We could collect some basic knowledge about NFDI and were absolutely looking forward to hearing more.

In the middle of the evaluation of the second round of consortia, and while busy preparing the second NFDI Conference, Sure-Vetter found time for an insightful tour around the development and status of NFDI and shared his expectations on the future of the initiative.

“Making the definition 100% clear: NFDI, as a term, is a collection of several things. First, there are substantially funded NFDI consortia, which each are bringing together researchers and research infrastructure for given research communities. These NFDI consortia are the result of rigorous evaluation and selection process which is governed by the German Research Foundation (DFG). Second, there is the association as a legal entity which is conducting the coordination of activities spanning across all NFDI consortia. The association brings together organisations from NFDI consortia as well as additional partners and it has 5 substructures including the directorate and the assembly of consortia. Actually, NFDI is all of this.”

How does NFDI work?

First of all, Sure-Vetter provided a comprehensive look at NFDI’s past and present. In a sense, NFDI is the result of a long-term process started in 2014, when the Council for Information Infrastructures (RFII) started discussing the concept of a national research data infrastructure. The Council published a position paper in 2016 in which the initiative was recommended, after which the idea was taken up in 2018 by the Federal Ministry of Education and Research and the Joint Science Conference (GWK). All German states, represented by their ministers of science and finance, provided a funding stream guaranteeing up to 90 million euro per annum for the duration of 10 years.

“FIZ Karlsruhe and KIT, both co-located in Karlsruhe, were tasked with setting up the NFDI directorate in a 2-year pilot phase starting in beginning 2019. This started the process of establishing NFDI as an association with its own legal status, becoming a legal entity which receives funding to finance people and offices. For 2021, it is foreseen to grow the staff of the directorate significantly. This directorate has the main goal to coordinate a network of organisations, which can group themselves into consortia.”

NFDI consortia write a proposal to be delivered to the DFG, which is then carefully selected by a large number of evaluators. Based on evaluation a list of consortia is proposed which is then, finally, approved by politics.

“We had the first round of 9 consortia, which were selected in 2020, who were announced in July and have been funded since October. The second round has already taken place and the evaluation process and selection process by the DFG has been carried out. In 2021, ten consortia have been proposed and need to be approved by politics. The finally selected consortia will then be announced in July 2021.”

Meanwhile the third NFDI conference took place on 8 July, kicking off the process for the third round of selections that initially started in May with the opening of the call. New proposals must be submitted by the end of September 2021.

One of the points that maybe aren't too obvious is that NFDI is not primarily aiming at running a new technical infrastructure but, as Sure-Vetter puts it:

“The infrastructure term in NFDI refers to people as infrastructure and with respect to that we are operating a network of people with competencies coming from different areas, sciences, infrastructures etc. From that perspective, we are indeed running an infrastructure.”

NFDI’s funding is aimed at covering personnel costs, while the initiative relies on larger infrastructures or computing centers for its technical elements. There e.g. is a demand for low barrier access to computing resources at mid-size level that can also be used by interdisciplinary collaborations of researchers. And this is what NFDI is: every consortium is interdisciplinary. Every consortium spans across organisations and the administrative burdens on the technical level translate into demands for strong computing resources.

Open Science and the EOSC ecosystem

Connectivity with the EOSC ecosystem will be a key aspect for NFDI, which is constantly looking at the wider European and international contexts to learn more about and interact with the different approaches. NFDI plans to build applications and data services and will come up with ways to make access to data better but, according to Sure-Vetter, this is only one part of the story.

“This first and big part of the NFDI story is answering the question how to shape and make the digital shift in scientific communities. Each participating scientific community therefore is initially asked to self-assess where it stands with digitisation, data science and data literacy. Then, as part of the application process for funding, each community needs to define what is needed as the next significant steps towards digitised research. What ultimately will make a difference is that all scientific communities participating in NFDI are invited to share their experiences with each other.”

People across research domains have understood that Open Science, the FAIR principles, open data and sharing data are relevant to their communities. NFDI will speed up the process of up-taking these principles by creating a huge community of practice in which experiences are shared widely and problems are solved jointly.

NFDI will also provide support on technical and policy issues, such as digitisation of resources, IPR, business models, or tackling legal aspects related to data. Questions from EOSC-Pillar or EOSC in general could also be answered, as this approach goes hand in hand with digitisation of the community processes.

“NFDI will open the information flows, contribute, and stimulate activities within NFDI to contribute to EOSC. Eventually, data services and other services from the national level can be made available in the EOSC infrastructure. Over time, I hope the number of such services will grow.”

Aside from EOSC, Sure-Vetter also sees great potential in the relationship with other initiatives such as Gaia-X, which relevant to industry.

“I discovered that EOSC-Pillar is working on a Federated FAIR Data Space (F2DS). I would gladly get into a discussion soon about this because our proposal for Gaia-X and NFDI has the title ‘FAIR Data Spaces’. In this idea, data spaces and FAIR are brought together by Gaia-X and NFDI respectively. It would be interesting to align the F2DS from EOSC-Pillar with what we are doing in this newly funded project where we are thinking about how to bring many data spaces together.”

Well-coordinated Networking - both nationally and internationally - is the basis to create a more effective research data infrastructure for the whole science community. Globally obtained data in particular can help to gain new insights and thereby develop innovations which help people and our planet.

Research data management is a motor for development. And NFDI is helping to make this engine run smoothly.

The EOSC-Pillar consortium will surely follow up on these exciting developments and strengthen the collaboration with NFDI, an emerging actor in the German landscape and for the wider EOSC ecosystem. 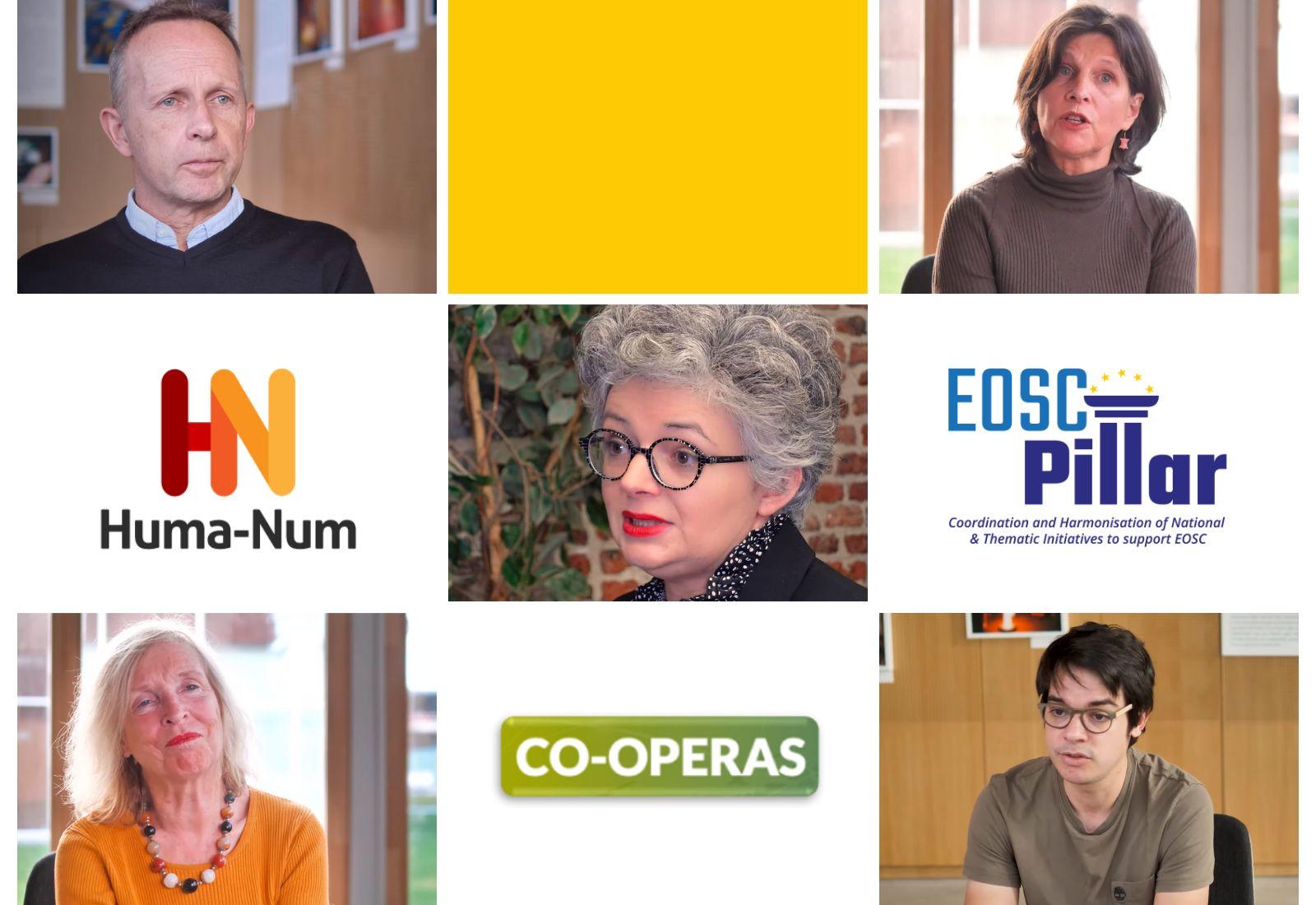 The Data Paper: A new video series co-produced by EOSC-Pillar

A series of 3 videos on the subject of data papers has just been published, co-produced by EOSC-Pillar in collaboration with CNRS (Huma-Num) and CO-OPERAS IN (OpenEdition), as a new form of publication in Social Sciences and Humanities that is part of the Open Science movement. 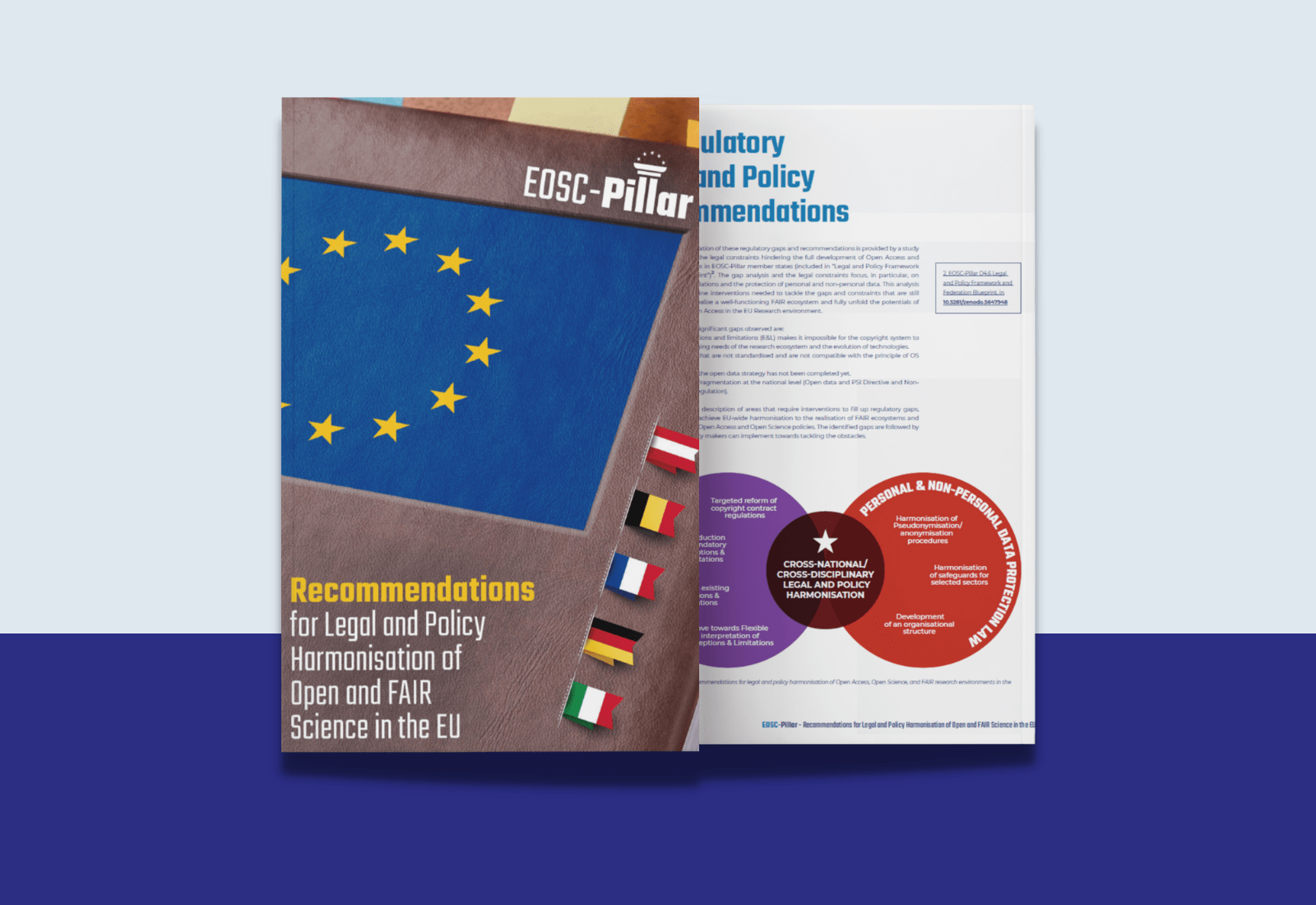 EOSC-Pillar produced a set of recommendations for legal and policy harmonisation of Open and FAIR Science across EU Member States, download your copy now! 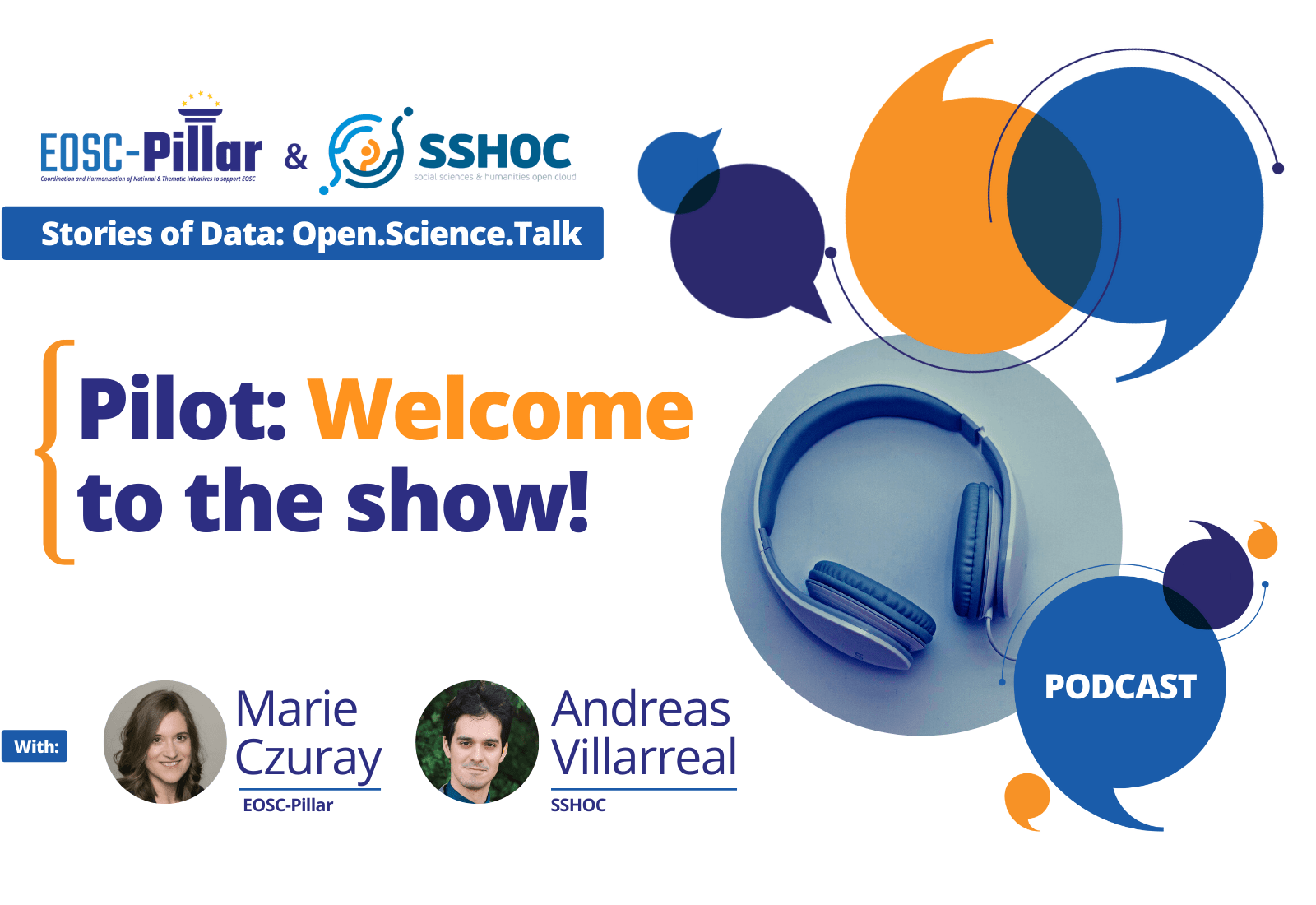 Stories of Data: Open.Science.Talk - Pilot episode: Welcome to the show!

EOSC - What is it and does it pay off? In this new podcast series produced by EOSC-Pillar and SSHOC, we are discovering the world of the European Open Science Cloud (EOSC).